All the protests in the world, demonstrations and collective cries for change. All in just a few seconds. Jon Brunberg has researched and searched, meticulously documented the popular mass-protests that have taken place over the last 19 years around the world. Or, between 1989 - which was the year the Berlin wall fell - and 2007. That amounts to a lot of events. Perhaps one should say - luckily enough. Poetically on human desire, being not so easily curbed; our longing for freedom and equality still permeates the human psyche. Harshly, our world is far from perfect.

Issues on democracy, power and society, visionary ideas and utopian architecture (honouring all those soldiers and civilians who have died in battle since the end of World War II) are all parts of Jon Brunberg's artistic practice. In his desire to understand the surrounding world, he at once examines and invites us spectators, to be participants, or receivers. The piece 19 years employs a political world map as backdrop, where the mass-protest sprout up one by one and leave a dot in the place on the map where it happened. The reduced, graphic expression, as well as the fast tempo, are largely alike that seen in the earlier piece 101 Years, which in turn, shows every war to ever take place in the 20th century. Two sides of the same coin.

There is something inherently contradictory in presenting something so frightening and something which has involved so many people during such a long time, so quickly. Like in passing. But the effect is contrarily overwhelming. lt is as if you see all of the separate events and the entirety all at once; they consolidate. And then, when you close your eyes, it is all re-enacted on the retina - as to remind us of what has taken place.

Re-published with kind permission from the author. 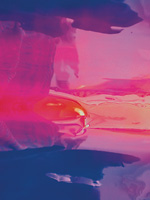